Call on the Senate to Block The Fracked Up Energy Bill

Call on the Senate to Block The Fracked Up Energy Bill

Call today to stop the dirty energy bill! Use the tool on the right to enter your phone number, and our system will call you back with some instructions. Please be patient as it can take a few seconds to call, and connect once you pick up the phone. When you’re ready, push “1” to be connected to the Capitol switchboard and make your call. Make sure to tell your Senators’ office that you want them to vote NO on this dirty energy bill that will expedite fracked gas exports.

We’ll keep a count of all the calls and report back to you after the vote. If you’re having trouble with the call tool? Click here to look up your senators and call them in D.C. directly.

If you need help thinking of what to say, Anthony’s email is below with lots of links and references to help:

The Senate has reached a consensus deal on the sweeping energy bill originally proposed by Senators Lisa Murkowski (R-AK) and Maria Cantwell (D-WA). The bill was held up in the Senate when Michigan Senators attached an amendment that would have sent much needed funds to Flint, MI to assist the troubled city with infrastructure repairs and water treatment.

But this version of the bill is as fracked up as the original and in some cases even worse. Senators who were fighting provisions in the bill that would increase offshore drilling caved, and even senators who were holding up the bill to get Flint, MI much needed funds for their water and infrastructure crisis have given in. None of these are included in the bill to be voted on — but a series of climate killing, Big Oil giveaways like fast-track permitting of fracked gas export and infrastructure are.

Senators Mitch “King Coal” McConnell (R-KY) and Climate-Denier-In-Chief James Inhofe (R-OK) claim that they are voting on a clean bill — but the reality is that this bill is a clean-sweep for Big Oil and other fossil fuel polluters. The message is clear, under this bill Flint and our climate get passed over and dirty fracked gas gets jacked up. That’s why I’m asking you to call your Senators today and tell them plain: Block the Fracked Up Energy Bill. 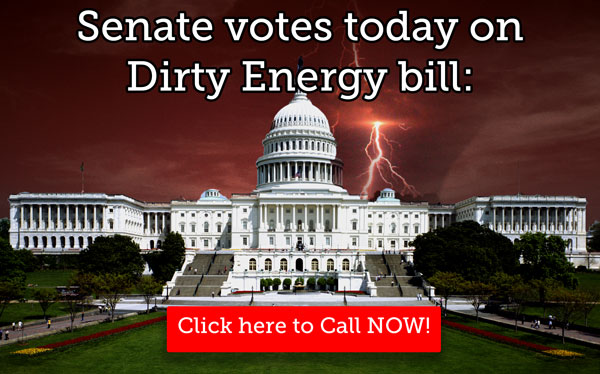 This week we received news that the historic climate agreement struck in Paris last year is on a fast track and could be implemented earlier than diplomats expected. But bills like this one are a step in the wrong direction. At a time when scientists are telling us that we must leave 80 percent of known fossil fuel deposits in the ground and immediately finance a just transition to 100 percent clean power, when we are seeing the warmest years on record year after year and stronger climate fueled weather disasters we have no time to take one step forward and two steps back.

That’s exactly what will happen though, if this bill slides through the Senate. Use this Page to call your Senators today and tell them to keep our climate moving in the right direction by voting “No” on the Fracked up Energy Bill.

And if you can’t make calls, please click here to donate $5 or more so that we can set up our Senate Hotline phone banking system.